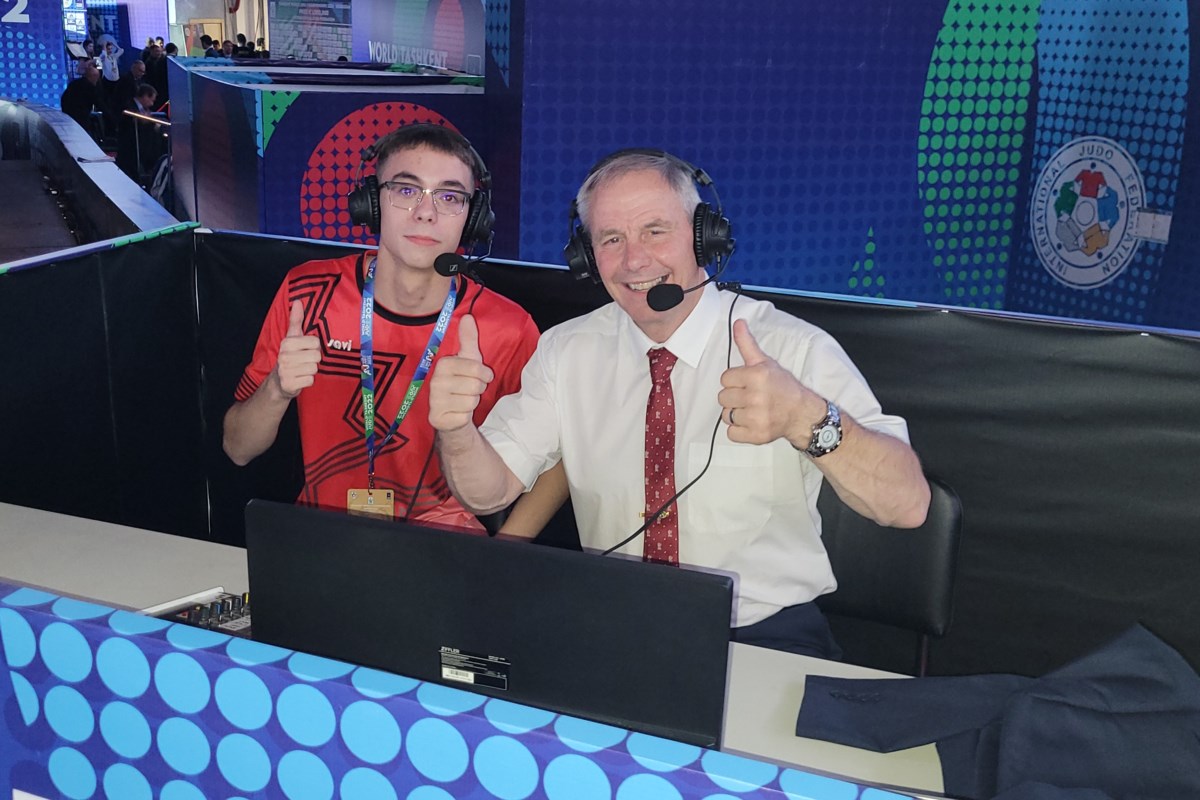 Tayven Tremblay was one of four lucky contestants from around the world to win a trip to Tashkent, Uzbekistan to compete in the 2022 World Judo Championships.

A local teenager recently returned from an unforgettable trip to attend the World Judo Championships in Tashkent, Uzbekistan.

Tayven Tremblay, 17, was one of four lucky winners of a video submission contest organized by the International Judo Federation (IJF) called Throw to Tashkent. To enter, contestants had to submit a video of a judo throw, and the videos were voted on by the public.

Tremblay, a very competitive judoka himself, submitted a video of an “uchi mata” throw he made during a match at the 2021 Quebec Open competition, where he also won the bronze in the U18 men’s 55 kilogram category.

The prize for winning the competition was an all-expenses-paid trip to the 2022 World Judo Championships, which took place over eight days in mid-October.

“We were jumping up and down,” said Tremblay’s father, Jared, when asked what their reaction was when they learned Tremblay had won. “I still didn’t believe it until they sent me plane tickets.”

“We didn’t think it was real,” Tremblay said.

Once in Tashkent, the capital of Uzbekistan, the Tremblays said their daily routine involved hours and hours of watching world-class judo.

Besides the Olympics, the world championships are the most prestigious events in sport. Tremblay, as a true student of the game, said his favorite memory of the trip was the jaw-dropping gold medal match between two Japanese fighters in the men’s 66 kilogram division, Hifumi Abe versus Joshiro Maruyama.

In addition to their front row seats in the competition, Tremblay also had the opportunity to meet many big names in the sport and found themselves getting advice from the competing Canadian team.

In addition, Tremblay was able to try his hand at color commentary with judo folk hero Neil Adams, the Olympic champion turned dedicated commentator for all major IJF events.

“I thought [Adams] was just going to ask me to listen, but he actually asked me to try and commentate on one of the games,” Tremblay said.

“It went well, it didn’t feel real to me that I was sitting next to the guy I had always heard online before,” he said of his first broadcast attempt.

The Tremblays also helped the IJF produce marketing and promotional material for next year’s video submission contest, which Jared said they will surely be entering again.

“We’re not holding our breath, but in about a year there’s going to be another one and we’ll definitely pull out all the stops and try to repeat, because it was like gold,” Jared said.

After staying home for about a week, Tremblay was back on the mat and competing in judo himself.

A successful and eventful competitive season in 2022 has given him the opportunity to earn a spot on Team Alberta’s judo roster for the 2023 Canada Winter Games, to be held in Prince Edward Island in February.

To earn his place in the roster, Tremblay played a best-of-three competition against Loic Beaton of Lethbridge on Sunday, October 30th.

After losing the first game on points, Tremblay managed to win the second, and in the third and final game he was able to smother Deaton, who tapped.

Tremblay will be competing at the Winter Games for the first time and on his last occasion as he will have passed the age limit for the 2027 competition.

“I think that’s probably my best chance because I’m the oldest I can be and the heaviest I can be in this group,” Tremblay said of his medal chances.

2022-11-08
Previous Post: What Colts players and coaches are saying about Matt Judon
Next Post: Judo: Iran, Kazakhstan, Turkey and Ukraine with two world champions on day 1