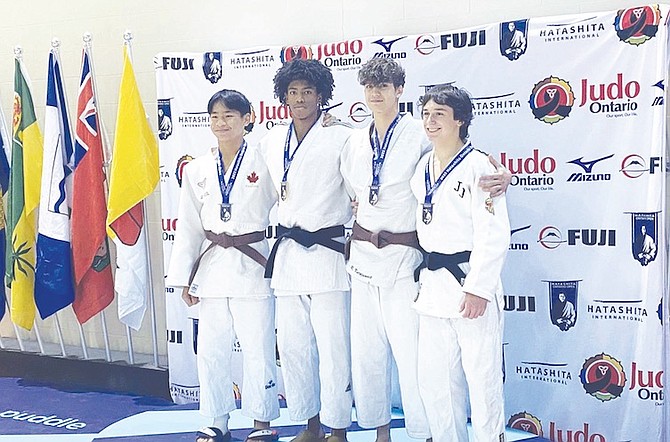 XAVION JOHNSON, second from left, is surrounded by his rivals at the Ontario Open Judo Championships at the Pan Am Sports Center in Toronto, Ont.

In his second tournament in two weeks in Canada, rising judoka from the Bahamas Xavion Johnson had to settle for a gold medal and fifth place respectively in the Junior and Senior divisions of the Ontario Open Judo Championships at the Toronto Pan Am Sports Center in Ontario.

On Saturday, 16-year-old Johnson, who attends Capstone Academy, won the Cadet Division, but yesterday had to settle for fifth in the Open Division.

” It feels good. It shows that what I did the week before was no fluke,” said Johnson, who easily won all three of his matches on Saturday in the 50-kilogram category where he was the tallest competitor at 6 feet.

After winning her opening match fairly easily, Johnson struggled in her semi-final match, but survived with the win.

After that, he got another quick decision in the final to win the title for the third time. “My techniques are better and I’m much more focused,” Johnson said. “Everything went very well for me, so I’m happy with my performance today (Saturday).

With no time to rest, Johnson returned on Sunday and fought in the senior category where he finished in fifth place.

Despite his loss, Johnson said he wasn’t disappointed at all.

“In my opinion, I fought much better today than yesterday,” he said. “I felt like I wanted to win more today, but that just didn’t happen.”

While in Canada, Johnson trained with the Lethbridge Kyodokan Judo Club, coached by Russ Gallant.

Johnson is coming off an impressive weekend last week at the Quebec Open at Claude Robillard Sports Complex in Quebec City where he picked up victory in the boys under 18 division of the 60 kilogram category to qualify for the Cadet World Championships in 2023.

Johnson, who also trains at Eastwood Judo Club with sensei Mackey Munnings and Black Ice Judo in the United States with Joshua White, he will take the rest of the year to recuperate and enjoy the Christmas holidays before preparing for the next season.

Her proud mother, Ordain Moss, said she was grateful for the help of her family members, including her great-grandmothers Tracey and Hazel Chea, her godmother Udean Sattom and Paul Sattom.