At the European Cup in Sarajevo over the weekend, GB Judo picked up three bronze medals as Josh Giles and Charlie Young both secured their first podium finishes of the season on day one. On Day 2, Wesley Greenidge picked up his first international medal since 2018, and his first senior medal, taking bronze.

Meanwhile, at the Junior European Cup in Nanterre, Tatum Keen continued his impressive recent form to clinch bronze; his third medal of 2022.

After a first-round bye, Giles (-60kg) beat Osher Soyonov (ISR) and Pawel Tylek (POL) to win his pool and book his place in the semi-finals.

In the -66kg category, Young beat Artyom Ghalachyan (ARM), Yair Elkind (ISR) and Daniel Kapelushnik (ISR) to win his pool, with all wins coming by ippon.

The defeat of eventual gold medalist and 4x African champion Mohamed Abdelmawgoud (EGY) in the semi-finals advanced Young to the bronze medal contest where he beat Tobias Fust-Crtanec (SLO) to win his first international medal. 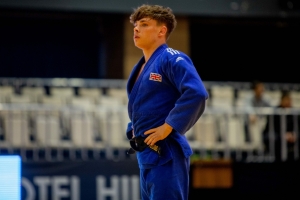 greenidge (the featured image) secured the last GB Judo medal of the competition on the final day of the +100kg competition. A first-round win over Gabor Karpati (HUN) was followed by a quarter-final win over Igor Vracar (SRB); both wins by ippon score.

A narrow loss to eventual gold medalist Hamza Ouchani (FRA) in the semis saw Greenidge battle for bronze against Donat Varga (HUN). Another win, by ippon, secured Greenidge’s place on the podium, where he received his first senior international medal.

At the Junior European Cup in Nanterre, Keen continued his impressive recent form to claim bronze. Seeded 4andKeen beat Meimouna Sissoko (FRA), after a first-round bye, before beating Laura Gomez-Antona (ESP) to win her pool and advance to the semi-finals.

Defeated junior world number one Chloe Devictor (FRA) progressed to the bronze medal contest where she beat Marina Castello-Diez (ESP) to add bronze to her silver at the European Junior Cup Athens and bronze at the Junior European Cup in Coimbra. 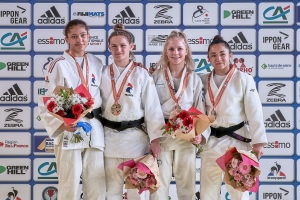 Elsewhere, in Sarajevo, there was a 7and finishing place for Andrew McWatt in the +100kg category. While there were also two 7and place in Nanterre for Katie Mills (-63kg) and Chloe Baker (+78kg).