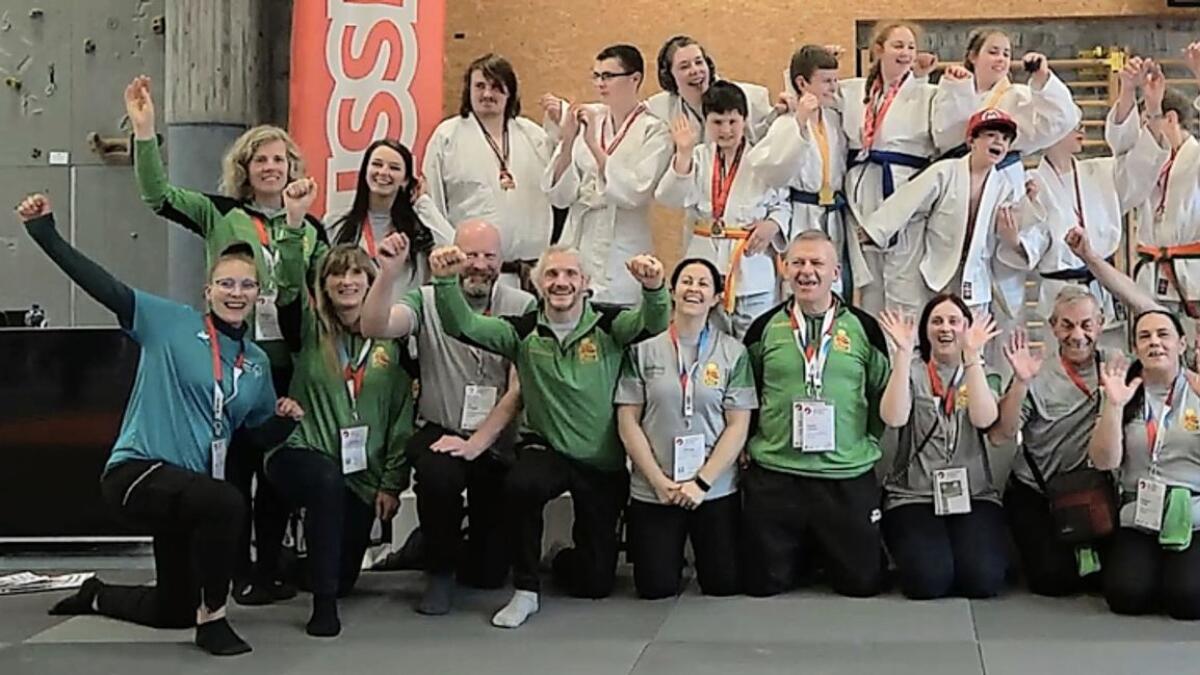 Many medals for Judo Team Ireland in Switzerland

27 Judo Assist Team Ireland members traveled to the picturesque town of Poschiavo, Switzerland earlier this month to take part in one of the biggest and best adaptive/inclusive judo festivals on the calendar international judo.

The Irish team consisted of eleven adaptive judo players (9 from Tipperary and 2 from Wexford), two coaches, two officials and twelve supporters and parents.

The team had been training hard for almost a year for this event and some; it was the first time they had represented Ireland on the international stage.

On the first day, more than 200 athletes accompanied by their coaches and supporters arrived in Poschiavo ready for the start of the festival. After check-in, everyone enjoyed dinner together at Punto Rosso. As Poschiavo is located in the Italian/Swiss mountains, the food had a very Italian influence. On the first morning, all the athletes converged on the sports arena to take part in a welcome international training session. All the Irish athletes were in good shape and in true Irish spirit they made new friends very quickly.

After the training session, it was time to sample some of the best pizza in town – the delegations were split into groups and enjoyed an amazing lunch at several fine restaurants in town. After lunch it was time for the first festival excursion. Our team opted for a boat trip around Lake Poschiavo. With stunning 360° views of the surrounding mountains, Team Ireland enjoyed a bit of team bonding and relaxation before the start of the competition.

Friday was the first day of competition which started with a mixed team event. This event mixes athletes from different countries and creates teams of nine people, who compete individually. The Ireland team took charge of their respective squads and the competition began.

Every Team Ireland competitor put in an incredible performance, with some winning all of their contests and some winning some of their contests. In true sportsmanship, they were humble in success and graceful in defeat. By the end of the first day, the Irish team had secured their first international championship medals with 3 gold, 2 silver and 6 bronze.

Friday continued with a train ride through the mountains to the summit lookout point where the team could relax and take in the breathtaking scenery. The evening featured the EU-funded Autjudo (autism/judo) research project conference, where Judo Assist President James Mulroy was the guest speaker.

Saturday was the day of the main competition where 200 competitors from fifteen countries battled it out for the prestigious titles and medals of a major international event.

The total medal count for the individual event was: 2 gold, 2 silver, 3 bronze, three 4th place and one 5th place. It was an incredible result for the Irish team and put them at the top of the medal table.

“As an organization we are very proud of Team Ireland and all they have achieved together,” said James Mulroy, Chairman of Judo Assist Ireland.

“We are lucky and honored to have the opportunity to work with some of the most amazing people. The team represented Ireland with class and a true inclusive spirit. Lifelong memories and friends were made at this event and others like it.

The next scheduled event is the Tipperary International Friendship Inclusion Games to be held in Nenagh on November 12-13. Over 180 competitors from across Ireland, the UK, Switzerland and Italy will converge on the historic town of Nenagh for what will be the only judo event of its kind in the world.

Judo Assist Ireland is dedicated to the promotion and development of inclusive judo nationally and internationally. We run a national/international special needs/autism activities and inclusion program specifically designed to encourage physical activity, inclusion, competitiveness and well-being for a wide range of people with a wide range of range of abilities and disabilities.