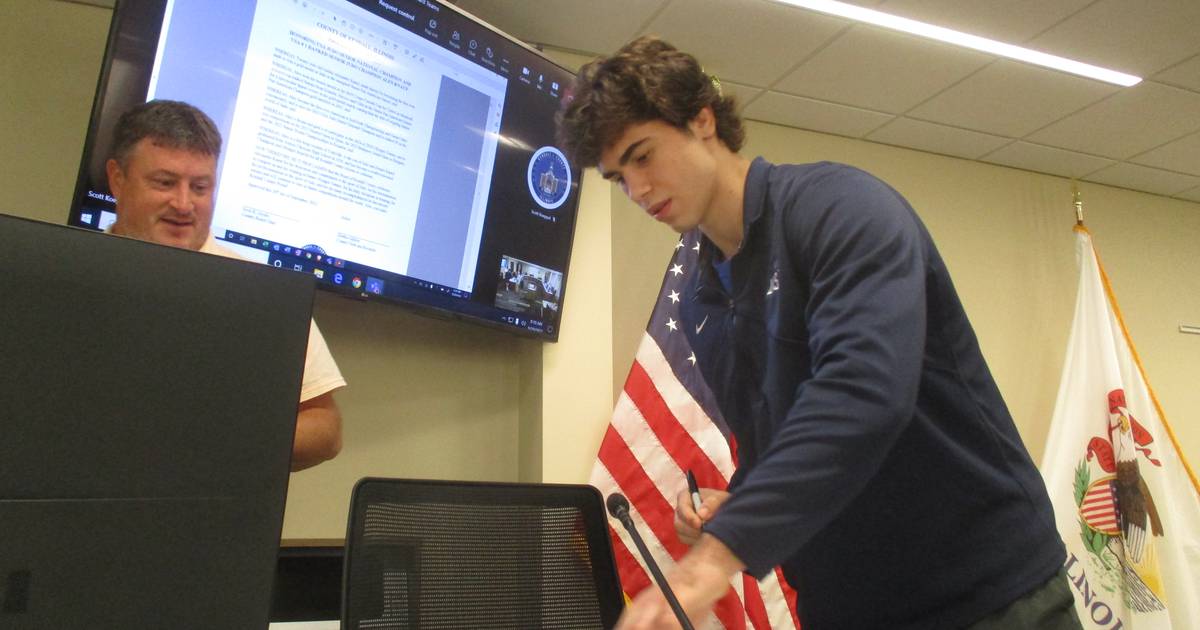 Knauf, the reigning Junior Pan Am Judo Champion gold medalist, was honored by the county board Sept. 20.

“Alex has become a world-renowned champion and an Olympic hopeful that all citizens of Kendall County can celebrate,” County Council Speaker Scott Gryder said as he presented a council proclamation acknowledging Knauf’s efforts.

“His determination to compete, his daily discipline in training and his professionalism in the sport of judo are the pride of Kendall County,” Gryder said.

Knauf, 20, is the two-time U.S. senior national judo champion in his weight class, winning the 2021 competition and repeating at this year’s tournament in Daytona Beach, Florida.

Every morning, Knauf works out at a gym in North Aurora, where he lifts weights, jumps rope and does other conditioning exercises.

The black belt hones his judo skills at the Cohen Brothers Judo Center in Vernon Hills three times a week and the Tohkon Judo Academy in Chicago twice a week.

After Gryder presented Alex Knauf with a plaque for his accomplishments, board members asked the judo star to sign the trading cards that had been handed out to everyone in the room.

Now Alex Knauf is looking to the Junior World Championships in Ecuador.

Knauf is the best junior and senior player in American judo. He is ranked third in the world among juniors in the 90 kilogram weight class.

At 6-foot-2 and 198 pounds, Knauf has a commanding build combined with a serious, success-oriented disposition.

“I consider competition a job,” Knauf said in an interview earlier this year. “The fun comes later when I’ve succeeded.”

Knauf is a 2020 graduate of Aurora Christian High School, where he stood out on the wrestling team, winning second place in the 2020 Illinois High School Association State Tournament in the 182 weight class. books.

He began his judo training with the Yorkville Judo Club at the age of 6 and earned his black belt in 2018 while still in high school.

“I would like to be an Olympian and then open my own judo club in Yorkville,” Knauf said.

For now, his focus is on tournaments that could help him make the U.S. Olympic team in 2024.