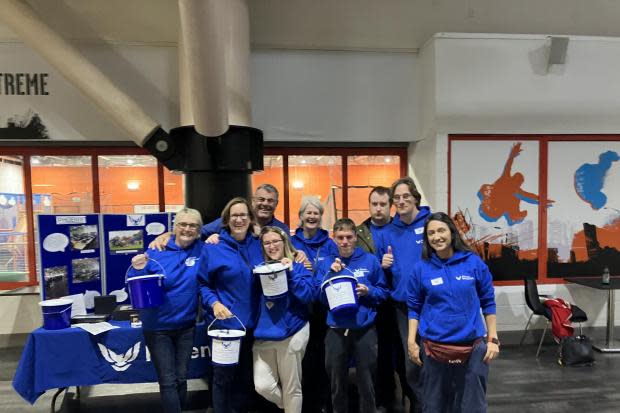 THE Swindon Wildcats met enthusiastic members of a local charity that helps people with disabilities and mental health issues.

The ice Hockey played against the Peterborough Phantoms at the Link Center on Saturday and took the time to say hello to customers at Phoenix Enterprise.

Phoenix acts as a crucial safety net that offers support, friendship, and work experience to hundreds of people who just need a little touch of kindness to help them navigate the world.

Tom B dated Phoenix for several years and spent weeks watching the Wildcats in action.

He said, “I was so excited to meet my friends from Phoenix on a Saturday night and watch the Wildcats play against the Phantoms.

“I love Phoenix and wanted to help tell other locals about it who might need a little help like me. Had a great night!”

The Phoenix general manager said: “I would like to say a big thank you to the Wildcats – and Ms. Ice Hockey Sally Fox-Price for allowing us to have a charity day on Saturday and donating a team jersey to us. signed at auction.

“Watching the faces of hundreds of fans and trying to contain the excitement of my colleagues in Phoenix all week underscored how important professional ice hockey is to the city.

“Our wonderful charity is equally important to the town – every weekday for almost 20 years we have provided a stepping stone into gainful employment for adults with learning disabilities or mental health issues.

“If paid work isn’t realistic, we offer an alternative to doing nothing good downtown or the depressing prospect of watching TV during the day.

“Take Viv, he attended Phoenix five days a week for nearly 20 years. At first we were told that Viv was unable to speak and showed little to no emotion. We are so proud to say that Viv is now a karaoke star who laughs and smiles throughout his time with us.

“That’s what Phoenix is!”

Swindon Wildcats Commercial Director Sally Fox-Price added: “It has been an absolute pleasure to welcome Phoenix Enterprises to the game. We can’t wait to see how much money they have raised for this fantastic cause and we really looking forward to welcoming them in another game very soon.

To learn more about Phoenix Enterprises or offer to volunteer, fundraise or donate, visit www.phoenixenterprises.co.uk