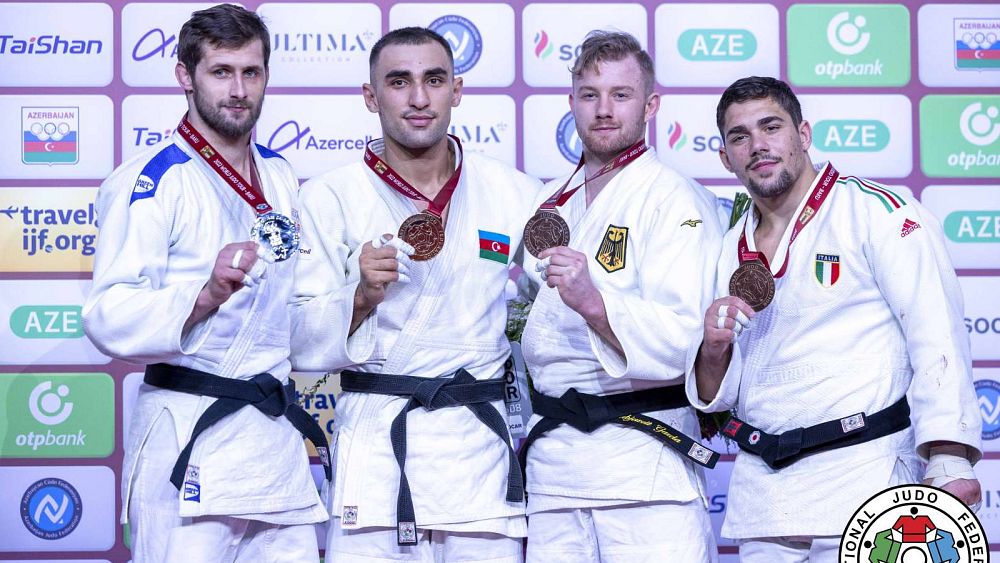 Day three of the Baku Grand Slam saw even more success for the host country.

Zelym Kotsoiev was the hero of the day, performing a fantastic feat for the Azerbaijan judo team, ensuring they won gold on the three days in Baku.

Fantastic footwork got the crowd going.

Azer Aliyev, Secretary General of the Azerbaijani NOC was present to present the medals.

“The crowd was a big motivation when I was heading to the tatami,” Kotsoiev said. “I immediately felt this incredible atmosphere. Losing was not an option, and winning the gold medal in the year of the 50th anniversary of judo in Azerbaijan makes me especially proud”

The kids filled the stadium throughout the Grand Slam, cheering on their heroes. On the third day, one of these young fans had the chance of a lifetime.

Eight-year-old Muhammed Shahverdili took on former world champion and Olympic silver medalist Saeid Mollaei in the final block of the Baku Grand Slam. His coach was none other than the Azerbaijani Olympic champion and true judo hero Elnur Mammadli.

This lovely moment of friendship and fun was a great way to celebrate 50 years of judo in Azerbaijan.

At -78kg, Italy’s Alice Bellandi has returned to form after a disappointing world championship.

A fantastic combination of attacks won her gold and brought her back to the incredible form she has shown all year.

She received her medals from IJF Sports Director Skander Hachicha.

At -90kg, veteran Marcus Nyman made another successful return to elite judo, beating Nemanja Majdov with a fantastic kick.

He received his medal from Vlad Marinescu, IJF Director General.

At +78kg, Milica Zabic won the only gold medal of the tournament for Serbia. In the final, she defeated Rochele Nunes from Portugal.

The medals were awarded by the IJF Chief Referees Director, Ki-Young Jeon.

As if winning gold on all three days of the tournament wasn’t enough, the rest of the home side were on fire all day, doing their country proud as they successfully celebrated 50 years of judo in Azerbaijan.