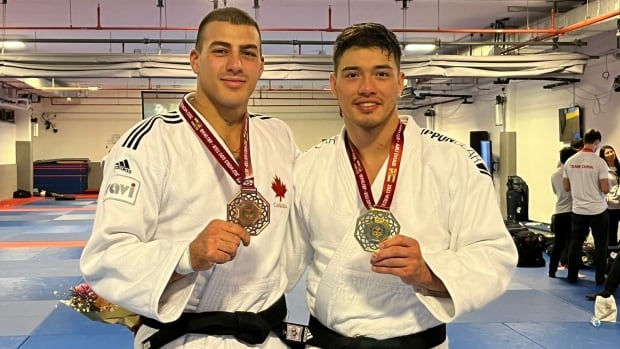 Canadian judoka Kyle Reyes stepped onto the podium in the men’s under 100 kilograms division at the Grand Slam event in Abu Dhabi on Sunday for the first Grand Slam gold medal of his career.

The 29-year-old from Toronto won all five of his matches, capping off his big weekend with a win over Spaniard Nikoloz Sherazadishvili in the final.

He opened the tournament by defeating Columbia’s Franciso Balanta by ippon in the second round after a first-round bye.

Reyes followed that up with victories over Otabek Turaboev of Uzbekistan and Nurlykhan Sharkhan of Kazakhstan to reach the semifinals, where he beat Olympic silver medalist Asley González of Romania by waza-ari.

In the final, Sherazadishvili tried to impose his uchi-mata and the Canadian tried to counter him. The Spaniard was disqualified on his last attempt after the referees found him guilty of diving.

This is the fourth Grand Slam podium for Reyes, who also has three silver medals. Reyes won his first world championship medal earlier this month with silver at the world judo championships in Tashkent, Uzbekistan.

Fellow Canadian Shady El Nahas also medaled in the same division on Sunday, finishing strong with a win over two-time Olympian Elmar Gasimov of Azerbaijan in a bronze medal match. El Nahas rebounded from a semi-final loss to Sherazadishvili.

The Canadian judokas will then travel to Azerbaijan for the next Grand Slam, November 4-6.